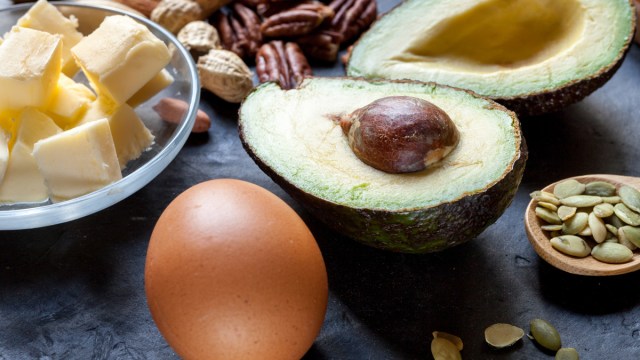 The ketogenic diet provides many of the same health benefits associated with fasting and intermittent fasting (listed above), and when done together, most people will experience significant improvements in their health — including not just weight loss, which is more of an inescapable side effect of the metabolic improvements that occur, but other benefits such as:

Improved insulin sensitivity, which is key for preventing insulin resistance, Type 2 diabetes and related diseases. Studies have shown diabetics who stick to a ketogenic diet are able to significantly reduce their dependency on diabetes medication. Many have even successfully reversed their diabetes this way.11 Having a healthy insulin level will also lower your risk of Alzheimer’s, as dementia and insulin resistance are closely linked.12

Reduced inflammation — Your body is designed to have the metabolic flexibility to use both sugar and fat as fuel sources. However, fat is preferred as it generates far fewer reactive oxygen species and secondary free radicals when burned. So, by eliminating sugar from your diet, you significantly decrease your risk of chronic inflammation.

Reduced risk of cancer — I believe cyclical ketosis is a revolutionary intervention that can significantly lower your risk of becoming a cancer statistic, for the simple reason that cancer cells lack the metabolic flexibility to use ketones for its energy needs, which your regular cells can. Once your body enters nutritional ketosis, cancer cells no longer have a readily available source of nourishment and essentially “starve” to death before they can become a problem.

Increased longevity — Ketosis spares protein breakdown, which is one of the reasons you can survive a long time without food. Much like calorie restriction (fasting), ketones also help clear out malfunctioning immune cells13 and reduce IGF-1, which regulates growth pathways and growth genes, and plays an important role in aging and autophagy and mitophagy.

Ketone metabolism also increases the negative redox potential of your family of NAD coenzyme redox molecules, which helps control oxidative damage by increasing NADPH and promoting transcription of enzymes of the antioxidant pathways though activation of FOXO3a.14

In a nutshell, ketone metabolism effectively reduces oxidative damage, which translates into improved health and longevity. The lack of sugar also helps explain why the ketogenic diet is associated with life extension.

Sugar is a very potent accelerator of aging and premature death, in part by activating two genes known as Ras and PKA, both of which are known to accelerate aging.15 A third reason has to do with the fact that both calorie restriction and intermittent fasting inhibit the mTOR pathway, which has been shown to play an important role in life extension.

Weight loss — If you’re trying to lose weight, then a ketogenic diet is one of the best ways to do it, because it helps access your body fat so that it can be shed. In one study,16 obese test subjects were given a low-carb ketogenic diet and a low-fat diet. After 24 weeks, researchers noted that the low-carb group lost more weight (9.4 kilograms; 20.7 pounds) compared to the low-fat group (4.8 kilograms; 10.5 pounds).

Even my own body was able to feel the benefits of following a ketogenic diet. When I first began, my weight dropped from 180 to 164 pounds, despite eating 2,500 to 3,000 calories per day. Since then, I have increased my consumption to 3,500 to 4,000 calories just to maintain my ideal weight.

A ketogenic diet and intermittent fasting both allow your body to shift from sugar- to fat-burning — an important metabolic flexibility that in turn promotes optimal function of all the cells and systems in your body. And, while there’s evidence supporting either of these as stand-alone strategies, it seems clear to me that combining them will produce the best results overall.

As there are caveats with intermittent fasting, such as the importance of eating healthy whole or minimally processed foods when you do eat, there are caveats when it comes to nutritional ketosis as well. Most people believe continuous keto is the key to success, but mounting evidence suggests this is not the case. This is why the mitochondrial metabolic therapy (MMT) program detailed in my book, “Fat for Fuel,” stresses cyclical ketosis. There are at least two significant reasons for the pulsed approach:

In this situation, eating carbohydrates will actually lower your blood sugar, as the carbs will activate insulin, which will then suppress your liver’s production of glucose. Long-term chronic suppression of insulin is an unhealthy metabolic state that is easily avoidable by cycling in and out of keto.

In other words, cells and tissues are rebuilt and restored to a healthy state once your intake of net carbs increases. (The rejuvenation that occurs during refeeding is also one of the reasons intermittent fasting is so beneficial, as you’re cycling between feast and famine.)

How to Implement Cyclical Keto and Fasting

To reiterate, fasting and nutritional ketosis provide many of the same benefits, and both work best when implemented in a pulsed fashion. Together, I believe cyclical keto and intermittent fasting is a near-unbeatable combination capable of really maximizing the health benefits of both. While the details are provided in “Fat for Fuel,” here is a summary of how to implement these two strategies as a cohesive health program:

Once this has become routine, move on to implement the ketogenic diet (step 2), followed by the cyclical component (step 3). You can take comfort in knowing that once you reach step 3, you will be able to cycle in some of your favorite healthy carbs once again on a weekly basis.

If you want to further maximize the health benefits of fasting, consider graduating into doing five-day, water-only fasts on a regular basis. I do it three to four times a year. To make the process easier, slowly work your way up to the point where you’re fasting for 20 hours a day and eating your two meals within a span of just four hours. After a month of doing this, pulling off a five-day water fast will not be nearly as challenging.

Vegetables, which are loaded with fiber, can be eaten without restrictions. The primary carb sources that need to be cut out are grains and all forms of sugar, including high-fructose fruits. (Healthy net carbs will be cycled back in once you’ve entered ketosis.)

Adding these harmful fats17 can cause more damage than excess carbs, so just because an item is “high in fat” does not mean you should eat it. Maintain these ratios of net carbs, fat and protein until you’ve achieved ketosis and your body is burning fat for fuel. Keto testing strips can be used to confirm that you’re in ketosis, defined as having blood ketones in the range of 0.5 to 3.0 mmol/L.

Keep in mind that precision is important when it comes to these nutrient ratios. Too many net carbs will effectively prevent ketosis as your body will use any available glucose first, since it’s a much faster-burning fuel.

Since it’s virtually impossible to accurately estimate the amount of fat, net carbs and protein in any given meal, make sure you have some basic measuring and tracking tools on hand. This includes a kitchen scale, measuring cups and a nutrient tracker (www.cronometer.com/mercola is a free, accurate nutrient tracker that is already set up for nutritional ketosis).

Keep in mind it can take anywhere from a couple of weeks to a few months before your body is able to effectively burn fat again. Again, cycling in and out of nutritional ketosis will maximize the biological benefits of cellular regeneration and renewal, while minimizing the potential drawbacks of continuous keto.

While higher net carb amounts are allowed once or twice a week at this stage, I would advise you to still be mindful of what’s healthy and what’s not. Ideally, you’d forgo potato chips and bagels, and focus on adding in healthier alternatives such as digestive-resistant starches.

High net-carb foods such as potatoes, rice, bread and pasta all become more digestive-resistant when they’re cooked, cooled and then reheated, and this is one way of making such indulgences a bit healthier. To learn more about this, see “This Simple Trick Can Minimize Damage From Unhealthy Carbs.”